Drag Racing Season Round Up.

The last round of the 2016 Nationals didn't quite go as planned this weekend. Our first pass off the trailer was a 9.4 @ 144mph. This was our quickest time for a first pass we have ever had, so things were looking promising. Once we got back to the pits we noticed that something wasn't quite right, large amounts of water coming out of the exhaust and a strong smell of coolant. This is usually a sign of a blown head gasket, so we made the tough decision to call it a day instead of pulling the cylinder head off and putting a new head gasket on it to continue.

We only had 2 goals this season, which were to run a 9second pass and be more reliable. Easy thing to say, but much harder to achieve. Going from a 10 second pass to a 9 second pass is a big jump and much harder than most people realise until they try to do it. We are really pleased that we achieved both those goals, so the drag racing season has been a good one for us. Once we ran our first 9 second pass, we never stopped running 9's. It's just as much a mental thing as it is having the car to do it. Once you have done it and know you can do it, it becomes much easier to do. The 4G63 engine we built has been very reliable for something making over 1000hp at the engine. Getting used to the power and the new setup has been the challenge, however we did improve on our previous best E.T of 10.19 and our highest mph of 144mph. This season we ran a new PB of 9.32 sec and a new mph PB of 150mph. This just goes to show that the changes we made to the car have us heading in the right direction. We already know what we need to do before the season starts again in November 2016, and plans are already underway to go even quicker. The car already makes enough horsepower to run an 8 second pass, and the 150mph trap speed is proof of that. Watch this space #project8s #8orbust #8secondclub.

A couple of our drag racing customers also had success this year. Ian McKay in his 4G63 powered Mazda GTX became a member of the 9 Second club running a 9.8 second pass at the 4&Rotary Nationals and Jason Horn in his 4G63 powered Lancer ran a new PB of 8.68 @ 160mph this year. Sometimes seeing your customers success gives you more satisfaction than achieving your own goals.

We look forward to seeing everyone at the track again next season. 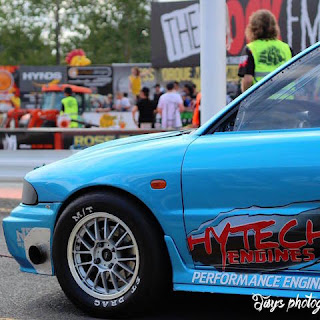 Drag racing can be a frustrating sport at the best of times - then PB's happen.

Today the drag strip at Meremere was open for 4 hours this evening for drag racers to do some testing before the next round of the NZ Nationals this weekend. We decided to head down with our tuner to do some data logging to find out why the car wasn't behaving the last time we were racing, which was at the 4&Rotary Nationals in January. Maybe he could identify the issue and help us fix it before racing this weekend.

To cut a long story short we found out what the issue was as soon as we started the car and looked at the tune while the car was idling. The tune was fixed in 5 minutes thanks to his handy work. We gave the car a quick once over and lined up for our first pass of the night.

9.56 second pass for our first run - a new PB! beating our previous best time of 9.74 seconds. We looked at the data logging for that run and it looked ok, so we filled the car up with more gas and lowered the tires pressure a little more and off we went for another pass.

9.32 seconds @ 150mph on the second pass - a new PB again! The only issue on that run was we hit the rev limiter before we crossed the finish line. We increased our rev limit for the next run, but we were no longer allowed to race due to it being to dark to run as we have no headlights.

Its amazing how fast that frustration just washes away the moment you achieve a new PB.

Pretty pleased with how everything went tonight. Fingers crossed this can continue during racing this weekend.

A big thanks goes to Tom, Dave from Tune Technic and Jason from GRP Automatics for their help tonight. 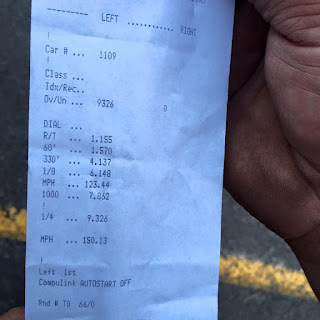