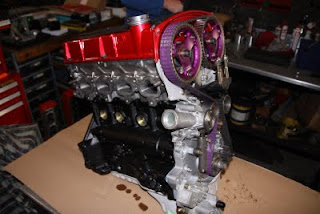 Fully forged internals, Jun cams, HKS Timing belt, Tomei head gasket, HKS cam gears and a race prepped cylinder head from Kelford Cams. This made it easy for us as we didn't have to port and polish the head or fit aftermarket valve springs, retainers, guides and valves ourselves.
Posted by Hytech Engines at 11:17

Hytech Engines gets a mention in Performance Car Mag #157 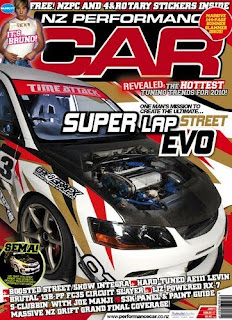 The latest issue of Performance Car Mag has just been released and the Hytech Engines workshop gets a write up. We will scan the article and put it on our website for all to see.
Posted by Hytech Engines at 16:14

Hytech Engines represents at Round 2 of Night Speed Drag Wars!

Dick Richardson (The Boss) won the Turbo 4WD class with a best ET of 11.15 during the night in his R32 GTR. The car had a small problem with the Line lock switch not working which meant he couldn't warm up the slick tyres before racing. This made the tyres slippery. Maybe it was a good thing because if the car went quicker than 11.00 he would be disqualified for going to fast for the race bracket.

It was also a great night for the Hytech GSR/EVO. The car was kicked out of the Turbo 4WD class for being too fast and was not allowed to compete in the points series. This resulted in a series of exhibition passes throughout the night. David Kemble piloted the car to a series of 10 second passes, the best of the night a 10.7 ET. The car should run around 10.5 on it's current boost setting of 20psi and 21psi tyre pressure. Their is still more left in the car and more boost to run :) Thank you to our sponsors INTERCLEAN for the race fuel for the night and KASPA TRANSMISSION (Otahuhu) for making sure the diffs, standard gearbox and clutch were in good shape for the night.

Below are 2 video clips from the nights racing. See our Facebook page for better quality videos. 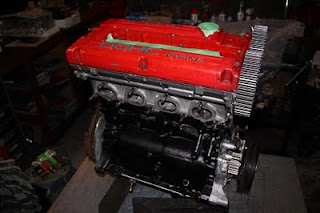 This was an easy build as their were no modifications to the cylinder head, just a new forged bottom end. 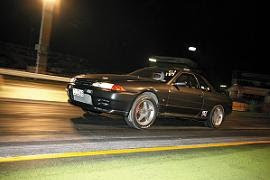 A pitcure of our GTR launching off the line at Fram Autolite Dragway, Meremere.

The first practise run of the night saw the power steering belt flip 180 degrees on the pulleys, shredding it in the process. The car suffered from worse than usual torque steer off the line, meaning we had to back off the throttle to straighten the car before flooring it again. Other than that the car ran fine on the night only running 20psi on pump gas. We managed to finish 2nd in C1 Class (Turbo 4WD). The car now has a new power steering belt and we should be at the next round in 2 weeks.