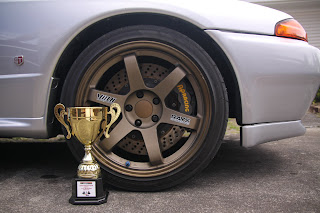 What a long and hot day it was.
We didn't have the greatest of days at Dragmasters. The boss couldn't get his GTR started in the morning so couldn't bring it down to race, probably a faulty crank angle sensor or something silly like that. So we took down another GTR along with our evo. The evo broke the standard gearbox on the first qualifying pass so it was back on the trailor. Time for a new PPG gearbox. The GTR had a really bad miss right throughout the rev range in every gear, resulting in a 14.1 sec first pass, then a 12.8 and 12.4 sec pass. No way near what it used to run or what it should run now. We thought we would try a few simple things to fix it givin the lack of tools we had with us. The GTR was put in the 11.9 second elimination bracket which meant we couldn't go any quicker than 11.9. We were the only import in this class. What do you know, the miss isn't as bad during the first round which meant he had to back off at the end of the track and coast over the line for the win to make sure we didnt break out. The next round was even better, the miss was almost gone and we had to brake hard at the end of the track to not break out, resulting in an 11.9 pass to take the win :P The final was very close, the miss was now gone and again we had to back off at the end of the track to not break out even though the V8 was half a car length behind. Again taking the win with an 11.9 sec pass. The GTR should have been in the 10.9 second elimination bracket, but you have to make do with what you've got on the day, so thank you dragmasters for the big trophy, certificate and $200