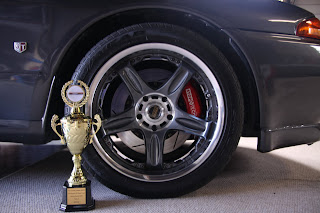 The 3rd and final round of the series saw a big turn out of competitors with several quick cars putting on a show. The boss didn't win his class on the night but didn't well enough to collect enough points to take out the Turbo 4WD class for the season. He received a trophy, prize money and a season pass to Fram Autolight Dragway. Well Done !!!
Posted by Hytech Engines at 16:11